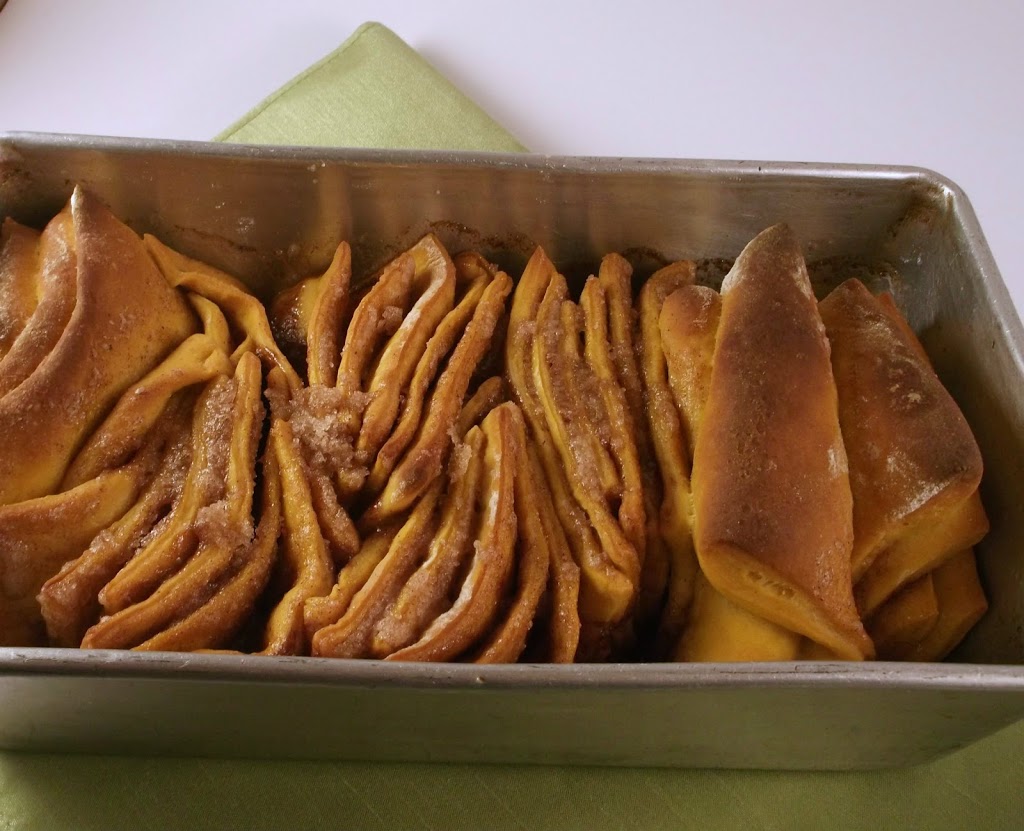 There is nothing that smells quite as wonderful as yeast bread baking in the oven on a cold winter day. But when you add pumpkin and spices to that  yeast bread it gets even better. I found a recipe for a pumpkin pull apart yeast bread on Pinterest and I knew that it would be something that I would be baking sometime soon.

I have made pumpkin quick breads, muffins, and even pancakes, but I have never thought of making a yeast bread with pumpkin. It is a shame that I had not found a recipe like this before. The flavor was yummy and as other pull-apart breads it was sweet and a little bit of gooey deliciousness.

This bread is perfect for breakfast or a midday snack. The sugar, cinnamon, nutmeg, and ginger add to the sweetness and flavor of this bread. Plus a brown sugar glaze is drizzled over the bread for even a little more sticky sweetness. The original recipe called for a tablespoon of rum in the glaze which I did not have so I substituted vanilla extract for it. But if you like the flavor of rum feel free to use instead of the vanilla extract. 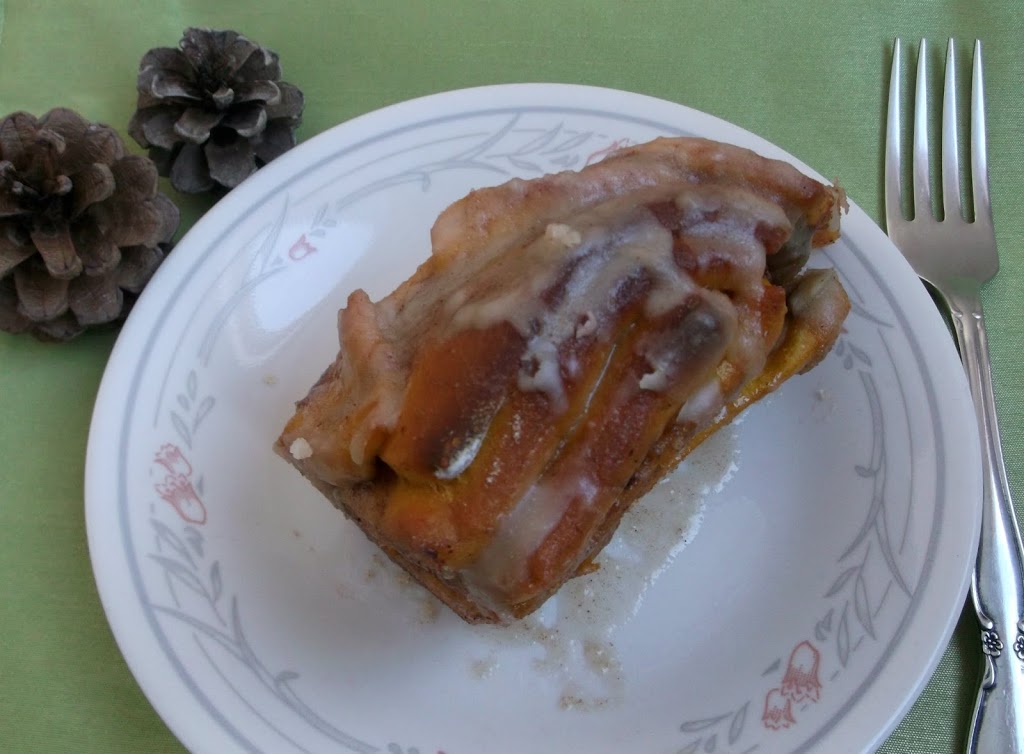 Brown sugar glaze
2 tablespoon butter
1/8 cup brown sugar
1 1/2 tablespoon milk
3/4 cup powder sugar
1 tablespoon vanilla extract (1 tablespoon rum if you prefer)
Directions:
In a saucepan over medium high heat, brown 2 tablespoons of butter, letting it bubble up and turn golden brown. Once browned, remove the pan from the heat and carefully add the milk, return to stove and heat through. Pour the milk and butter into a large mixing bowl and let cool so it just warm. At this point add the yeast and 1/4 cup of sugar and allow to proof for around 8 minutes or when the mixture’s top is foamy and the liquid is cloudy. Once the mixture is proofed add the pumpkin, salt, and 1 cup of flour. Stir until combined then add the rest of the flour 1/2 cup at a time. Keep kneading the dough until it is smooth and elastic and just slightly sticky.
Spread a small amount of oil on the bottom of the bowl and turn bread to coat both sides. Allow to rise in a warm place for around an hour or until the dough is doubled in size.
While dough is rising mix the sugar, cinnamon, nutmeg, and ginger until well blended. Set aside. Grease a     9 x 5 loaf pan and set aside.
When the dough is doubled in size place on a flour surface and roll dough out into a 20 by 12 inch rectangle. Spread the butter over the dough and over top of the butter sprinkle the sugar and cinnamon mixture evenly. Press the sugar mixture into the dough so it is sure to stay in place. Cut the rectangle into 6 strips. Lay the strips on top of each other and cut each strip into 6 even squares (cut in half then each half into thirds). Stack the strips vertically into the loaf pan. Cover the pan with a towel and let rise for 30 to 45 minutes.
Bake in a preheat 350 degree F oven for about 30 to 40 minutes or until the top is golden brown.
For the glaze, in a sauce pan add the butter, brown sugar, and milk and bring to a boil. When it comes to a boil remove from heat and add your powder sugar and vanilla extract. Stir until the glaze is smooth and creamy. Remove bread to a serving plate and drizzle glaze over bread. You can serve this warm or cold either way is delicious. 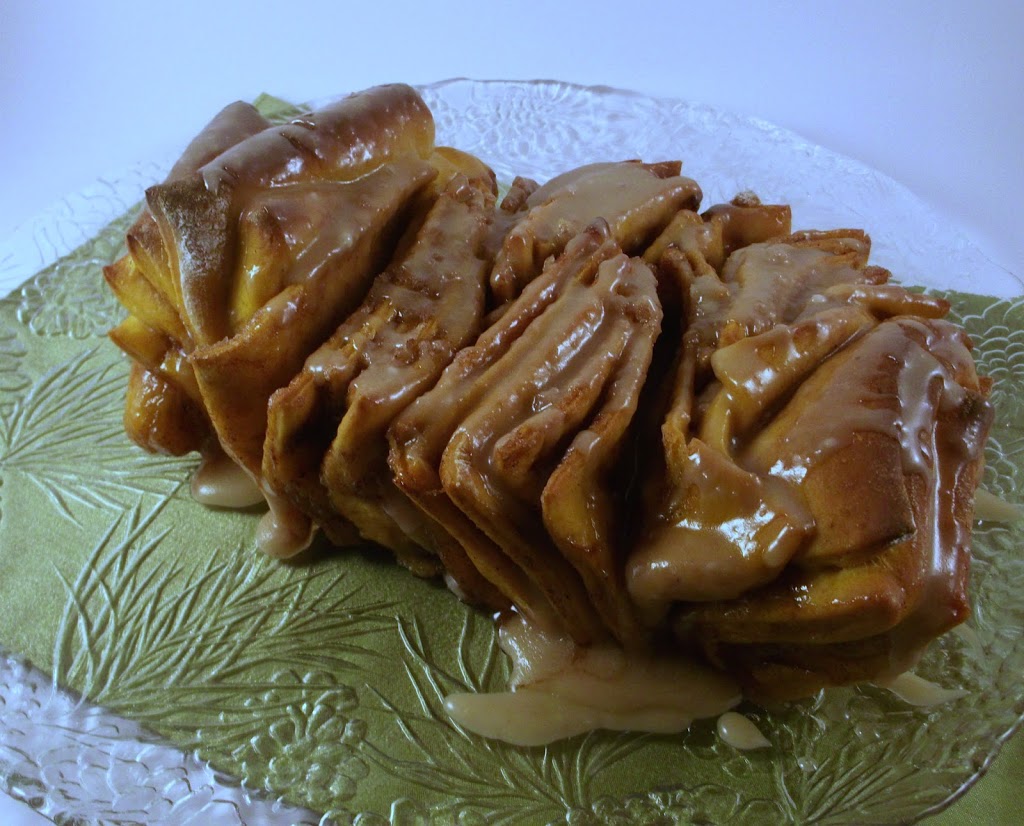