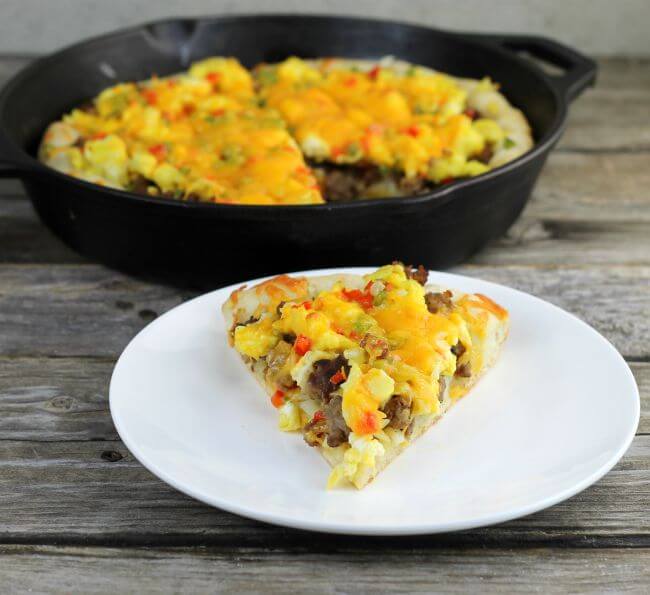 I always thought that pizza was for lunch or maybe dinner, but not for breakfast. This recipe changes my image of pizza and brings it to a whole new level. 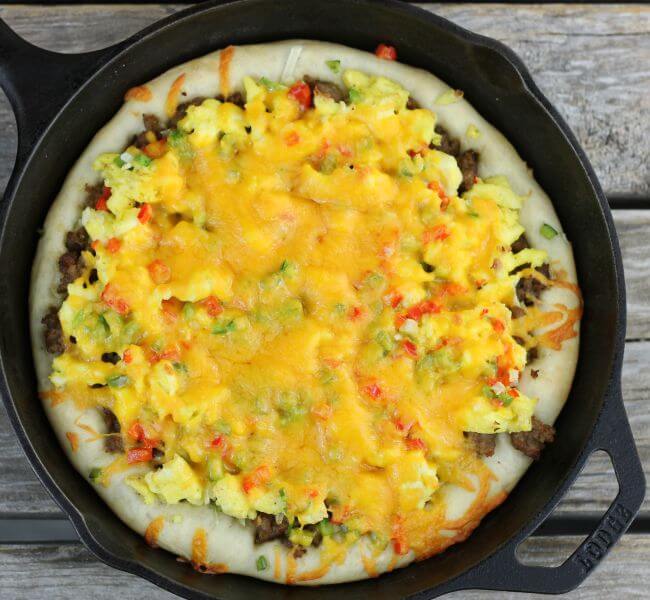 Don’t worry if you don’t like any of the ingredients in this recipe, they are easy enough to change out. It is simple to change things around and make it to your taste, but I have to warn you the ingredients for this sausage breakfast pizza make a really tasty breakfast. 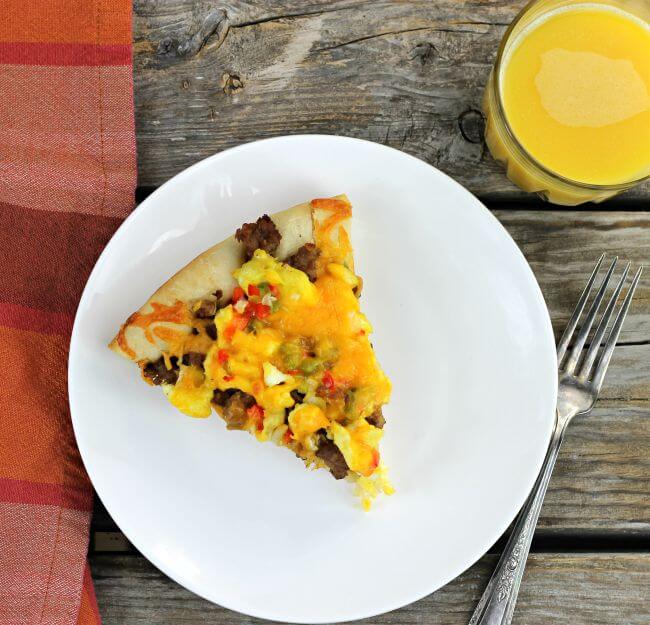 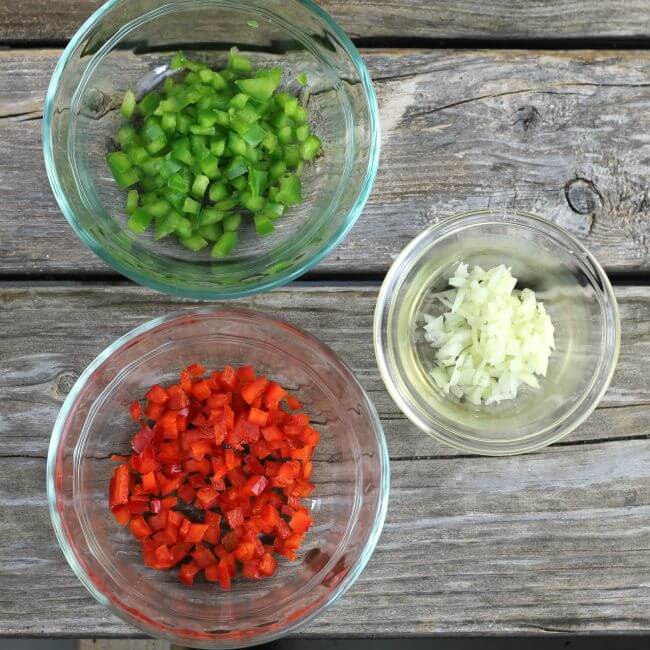 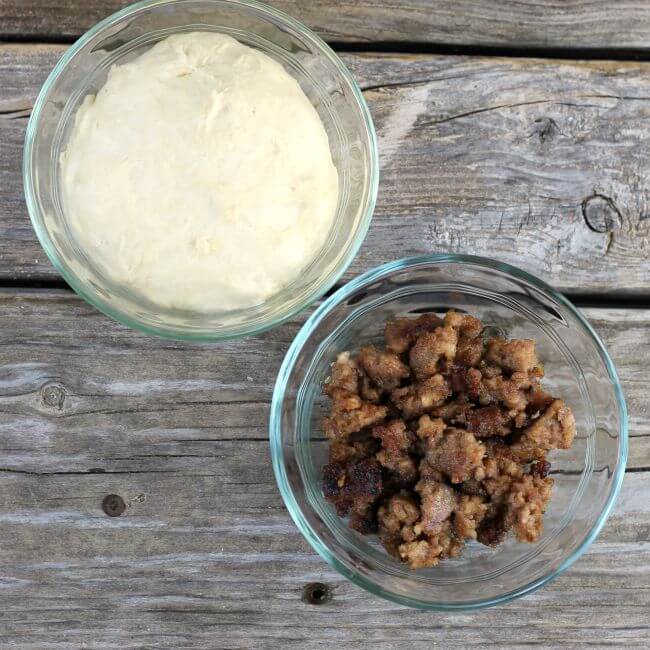 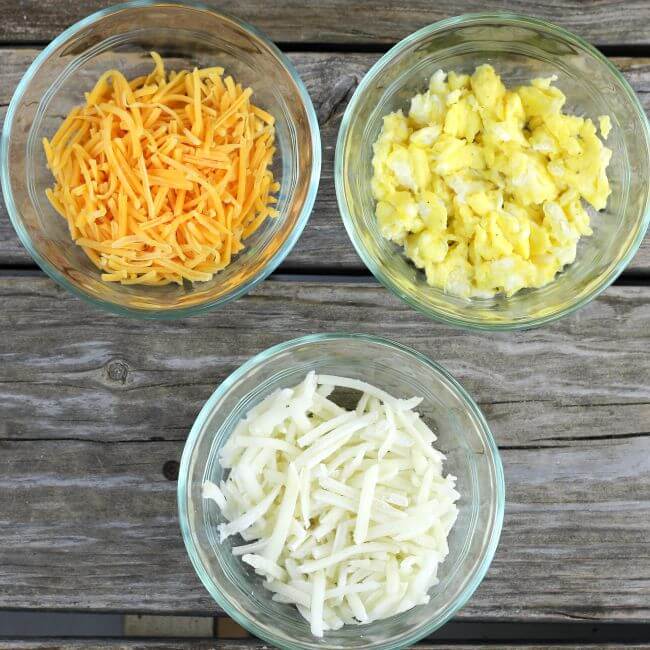 Make the pizza dough following the steps in the recipe and set it aside to rise. If using store-boughten dough remove from the refrigerator and bring it to room temperature.

Brown the breakfast sausage, just to the point where it is no longer pink. Remove any grease from the sausage. Let cool. 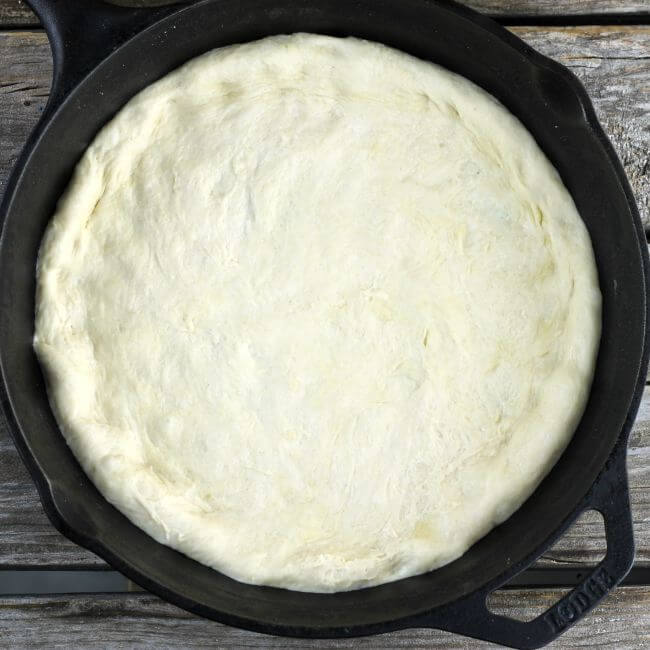 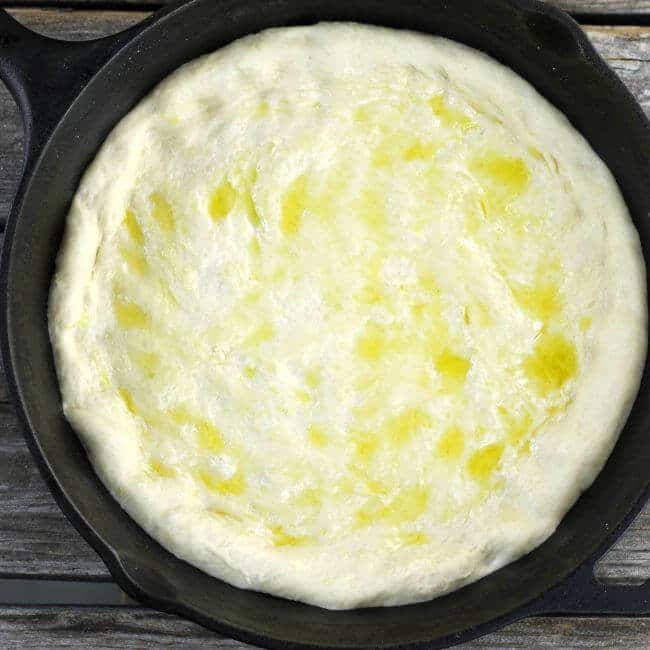 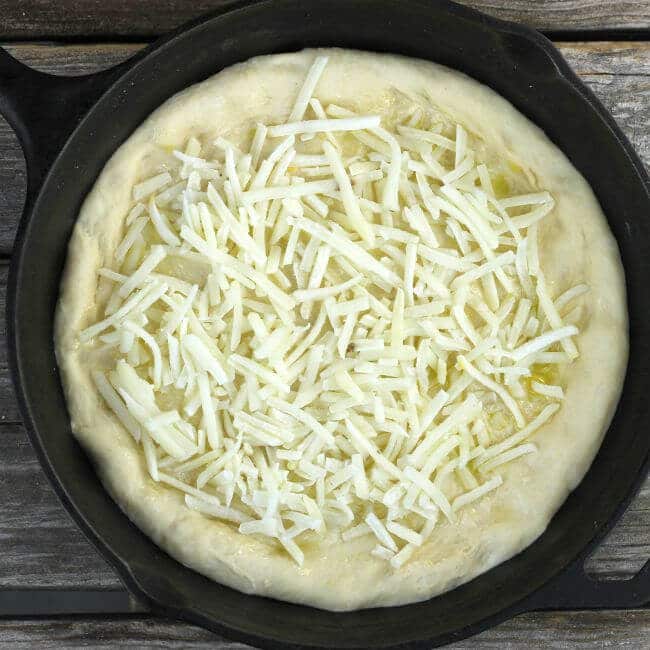 Chop the green pepper, red peppers, and onions. Make sure that they are chopped fine so that they will cook through so you end up with veggies that are not raw. If you prefer larger pieces of vegetables I would suggest pre-cooking them.

Scramble the eggs before adding them to a non-stick skillet that is lightly sprayed with a non-stick cooking spray. Remember not to overcook. 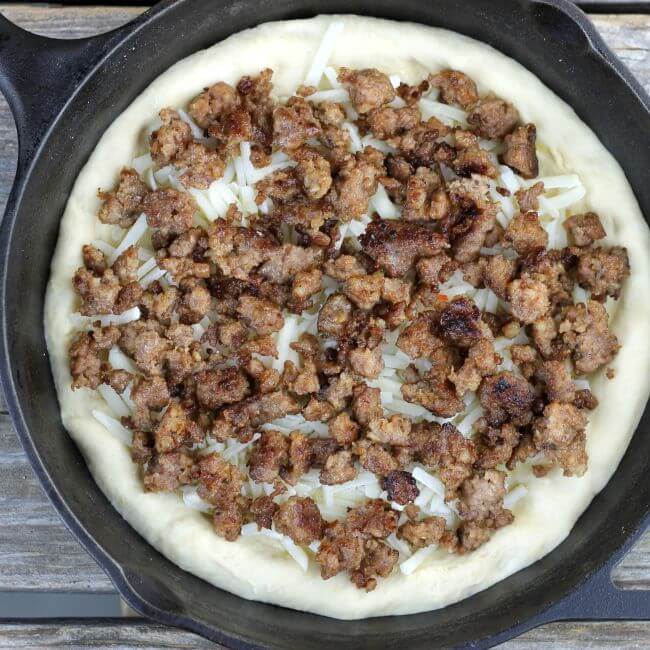 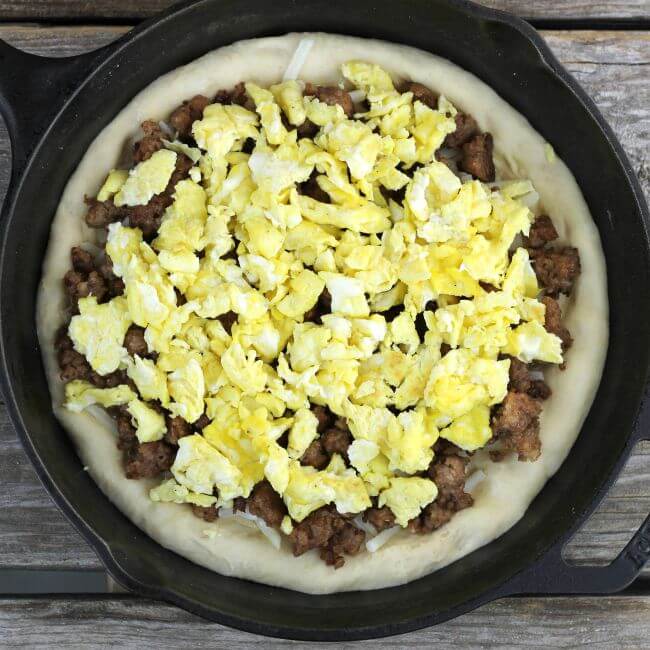 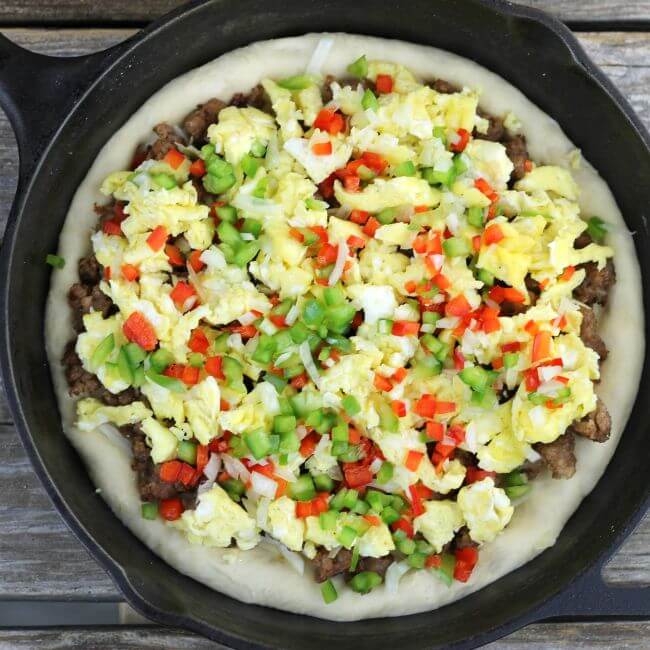 Place the pizza dough in the middle of the prepared cast-iron skillet and with fingertips press the dough until the bottom of the skillet is covered. Pinch the edge so as to make a lip around the edge of the skillet.

Brush the crust with olive oil. Layer the ingredients on top of the crust, starting with the hashbrowns first then the breakfast sausage, then the scrambled eggs, then the vegetables, and finally the shredded cheese. 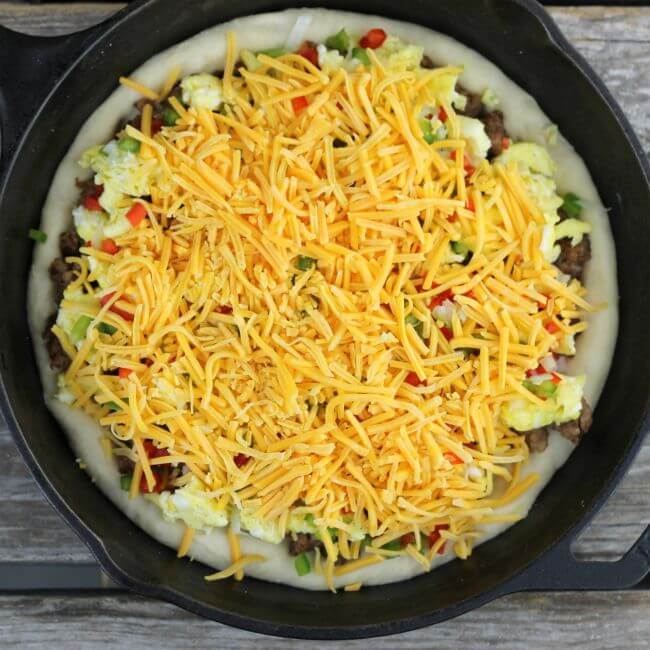 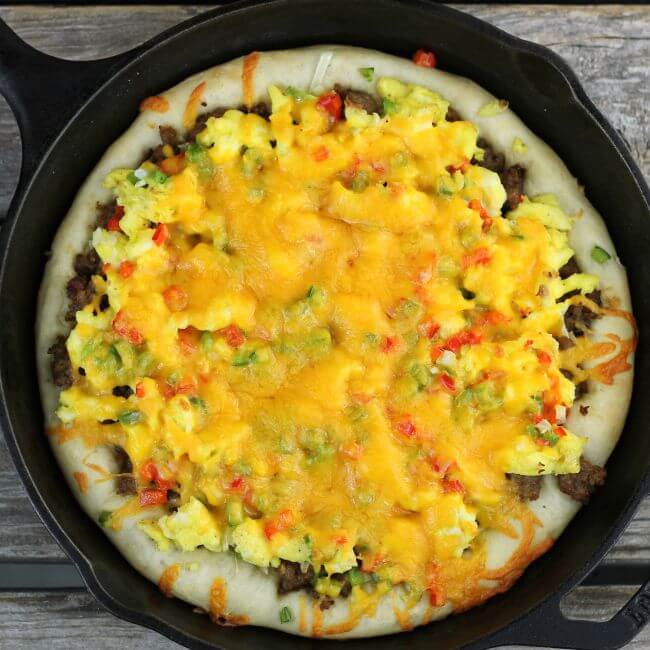 Place in the oven and bake until the crust starts to brown and the cheese is melted. Remove the pizza from the oven and let rest for a few minutes before cutting. Serve and enjoy.

Looking for addition breakfast recipes? Check these out: 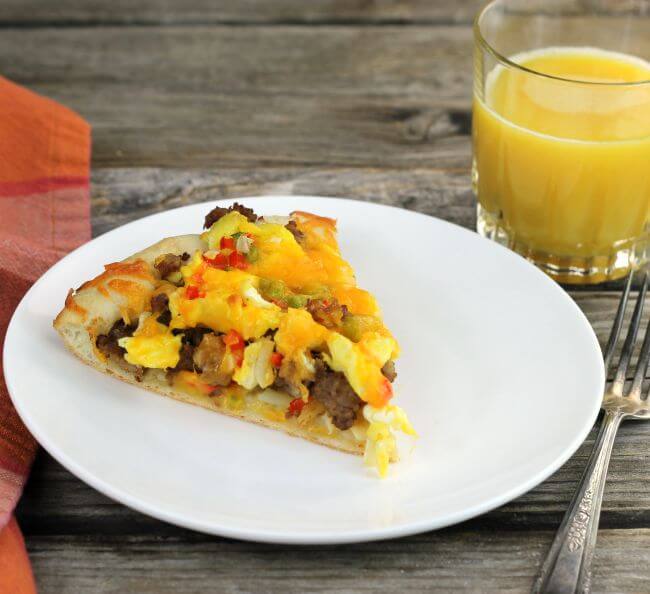 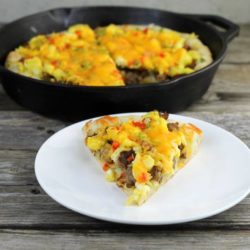 Sausage breakfast pizza, not your ordinary pizza, a simple way to change up your breakfast. A breakfast that will have the whole family running to the table.