Cream Puff Cake is a decadent dessert that will impress everyone that tastes it. This is an easy way to enjoy cream puffs, it is so much less work than the individual ones.

If you love cream puffs you are going to love this dessert. It has the same great taste as the individual puffs, but it is so much easier to make. Another great thing about this dessert it does not take too long to make.

Preheat the oven to 400 degrees F.

In a large saucepan add the butter and the water. Bring to a boil. Once the water is boiling add the flour and beat until it forms a ball.

Remove from the heat and add the eggs one at a time.

Spread the dough into an ungreased 9 by 13-inch pan. Bake until the crust starts to lightly brown. Cool completely.

Make the filling. Beat the cream cheese until fluffy. Add the milk gradually until it is all mixed in.

Add the pudding and mix until the mixture thickens. Mix in the Cool Whip.

I have more dessert recipes that you need to make. Check these out:

If you make this easy cream puff cake I would love to hear about it! Please leave me a comment and a rating. 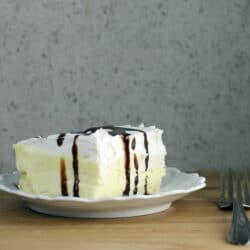 Cream Puff Cake is a decadent dessert that will impress everyone that taste it. This is an easy way to enjoy cream puffs, it is so much less work than the individual ones.
5 from 1 vote
Print Pin Rate
Course: Dessert
Cuisine: American
Keyword: Cream puff cake
Prep Time: 25 minutes
Cook Time: 19 minutes
Servings: 24 servings
Calories: 223kcal
Author: Dawn

Nutrition information is an estimate and may vary with the brands of ingredients used.