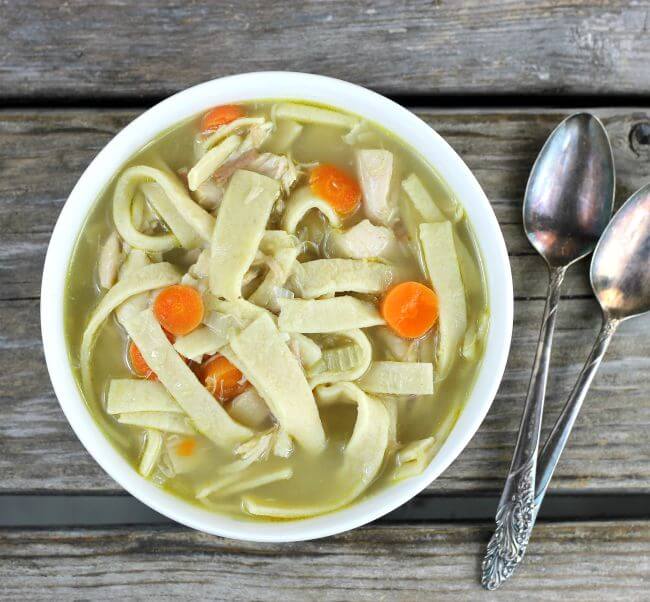 I can’t think of any food that is more of a comfort food than chicken noodle soup. But it must have homemade noodles that are made from scratch. Egg noodles that are purchased from the store just won’t do. 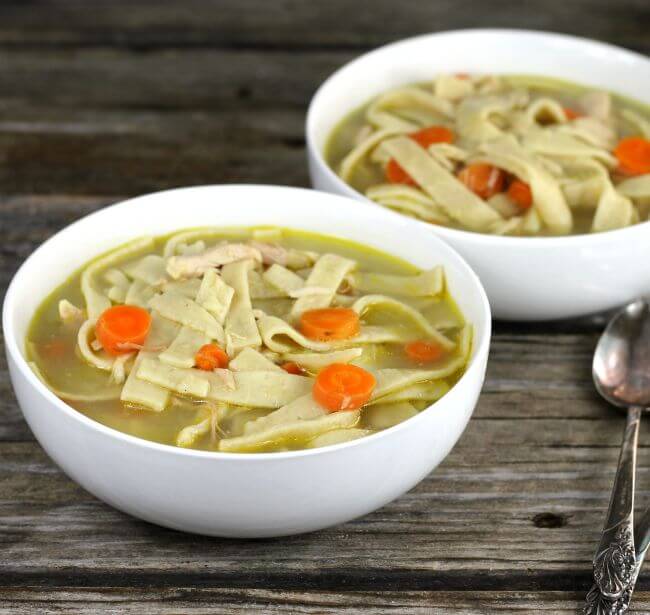 As a kid, my mom would make this soup for our family. I really don’t ever remember her going to the store to buy noodles, they were always made from scratch. She would say over the years that her cooking was a labor of love. As a kid, I really didn’t get, but as an adult, I know exactly what she meant.

Yes, the noodle will take more time to make them, but they are so worth the extra work.

Also with this recipe, there is no need for a fancy pasta machine, all your really need for equipment is a sturdy rolling pin. They are really simple to make and I really love the flavor and texture of the noodles. 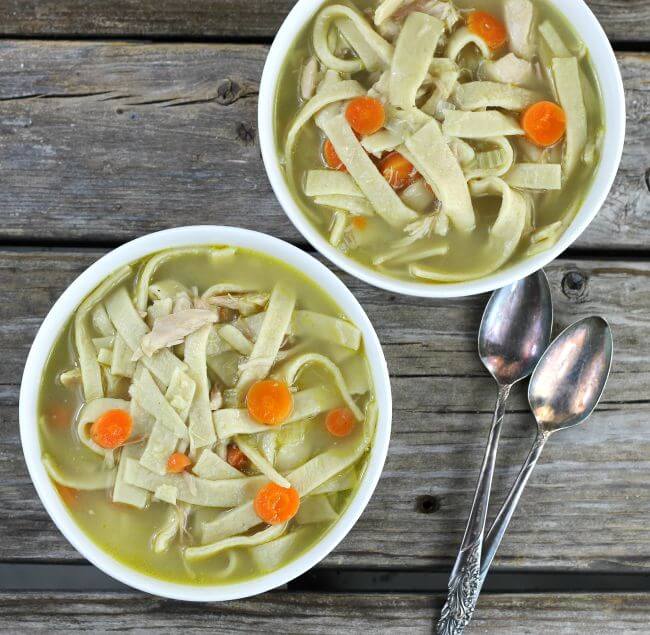 Prepare the egg noodles. Add the eggs and milk and beat together. Mix in as much flour as you can to make a stiff dough. 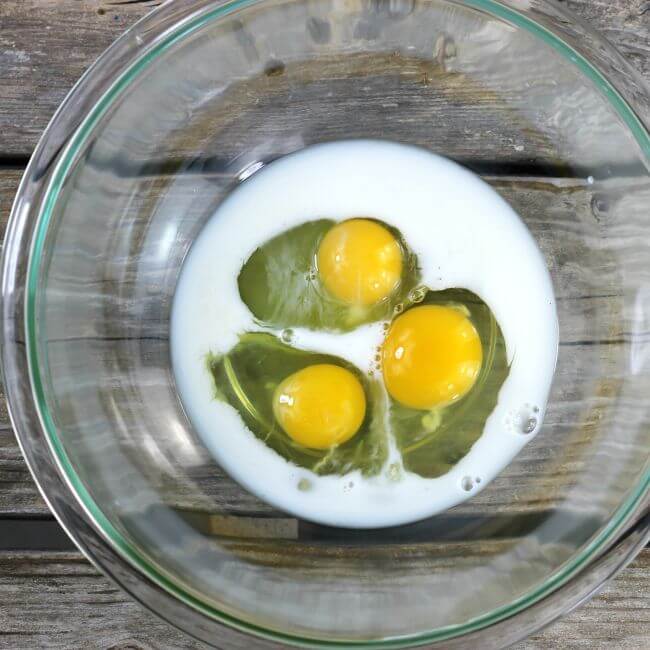 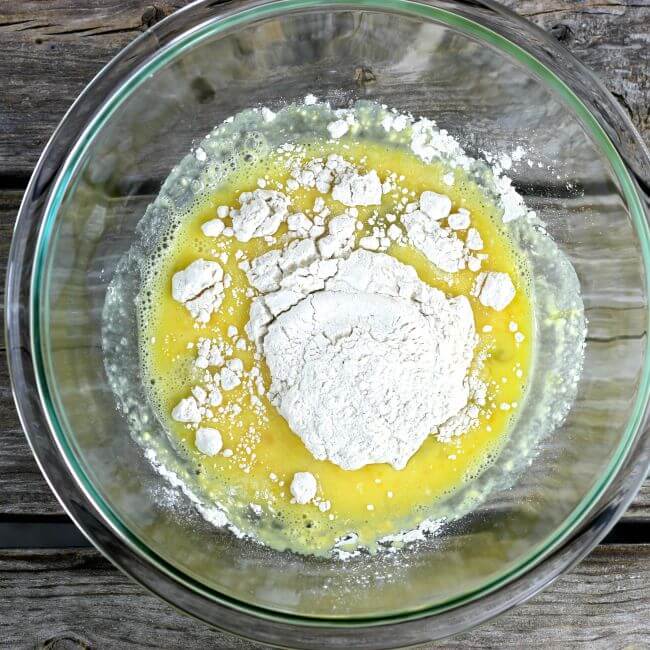 Divide the dough into 4 balls and roll out as thin as possible with a rolling pin. Let dry for about an hour turning over about halfway through the drying time.

In a large Dutch oven or soup pot add 2 tablespoons of olive oil and add the onions, carrots, and celery cook until the vegetables begin to get tender. 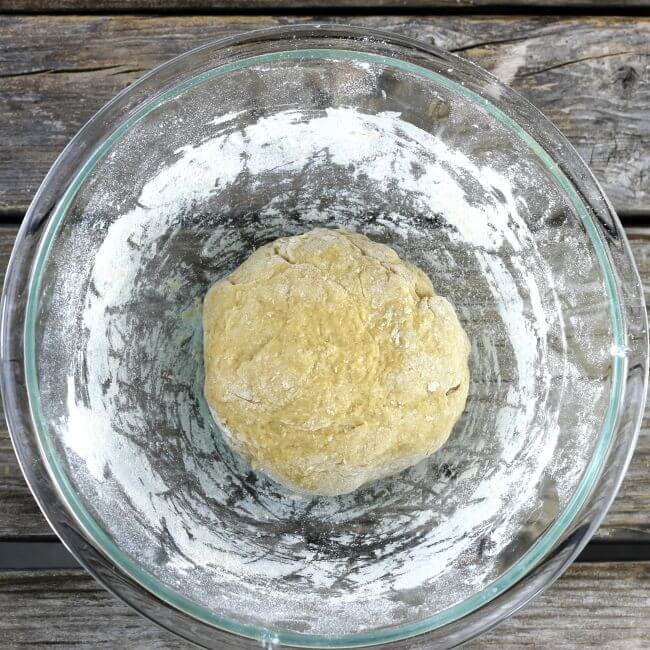 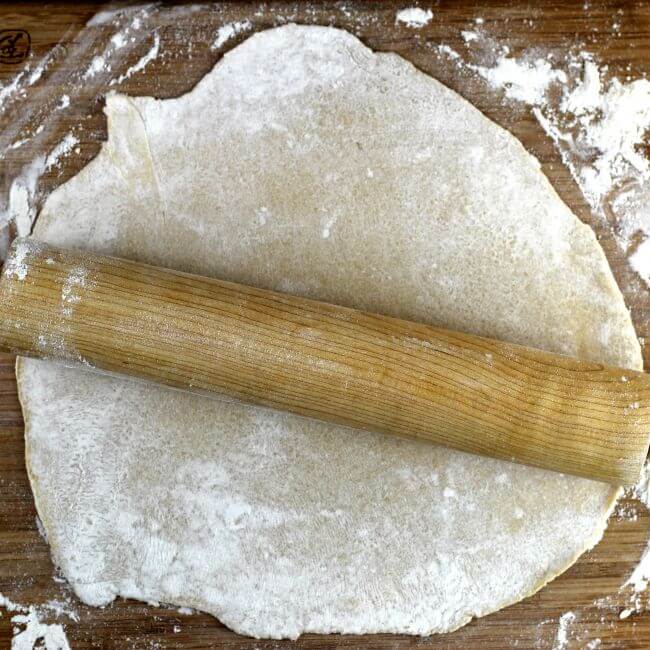 Add the chicken broth and cooked chicken to the vegetables.

Prepare the noodles for the soup. Cut the noodles using a pizza cutter to the desired size. Remember that they will puff up after they are cooked. 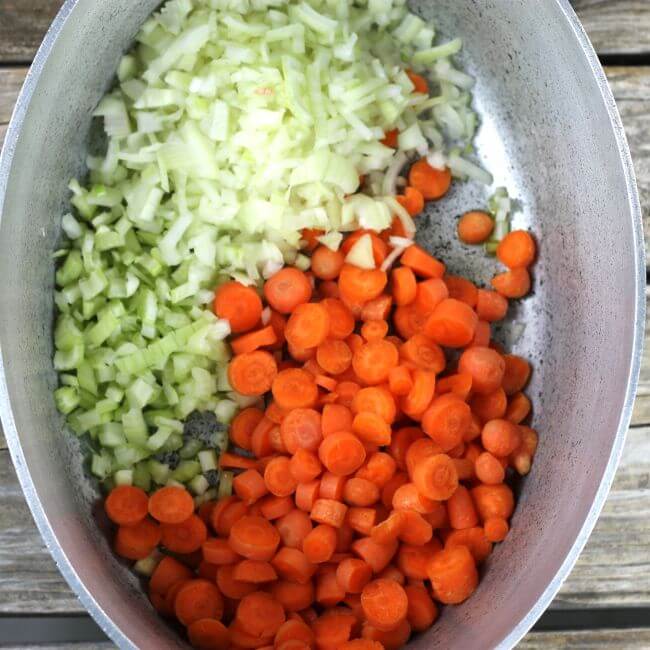 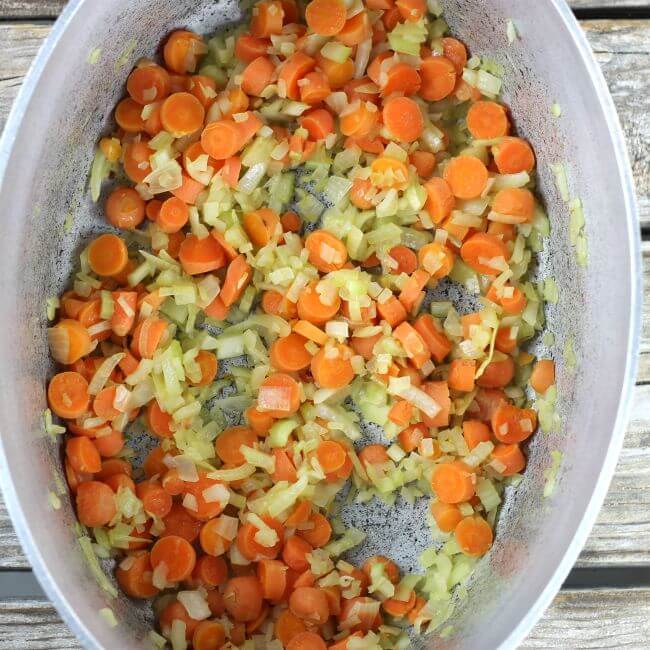 Once the noodles are cut. Add water to a large saucepan and bring to a boil. You will need to have at least 4 cups to 6 cups of water to cook the noodles in.

Once the water is boiling drop the noodles into the boiling water in batches, about one handful each time. Cook until the noodles come to the surface about 20 seconds. 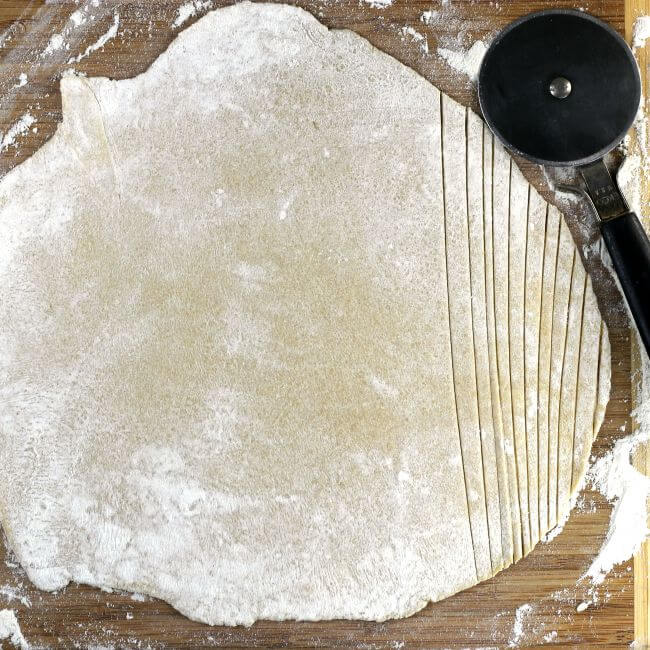 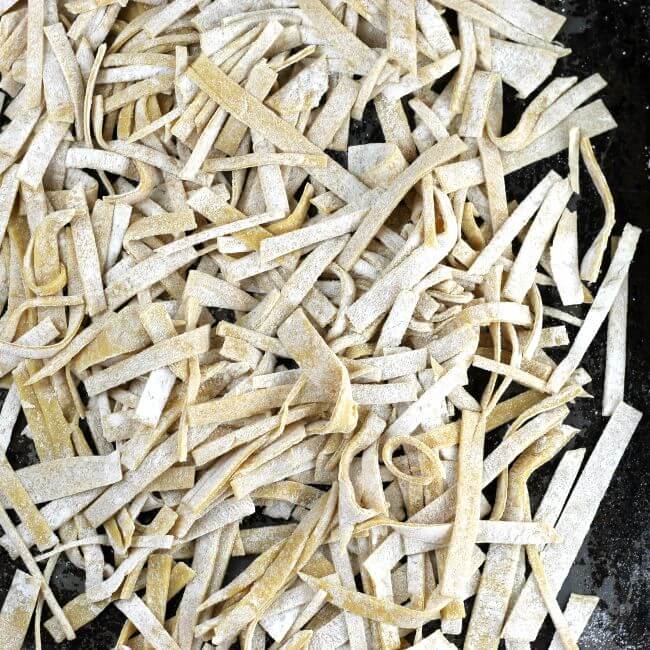 Using a slotted spoon remove the noodles from the water and add them to the soup.

Cook the soup until the noodles are cooked and the vegetables are tender. 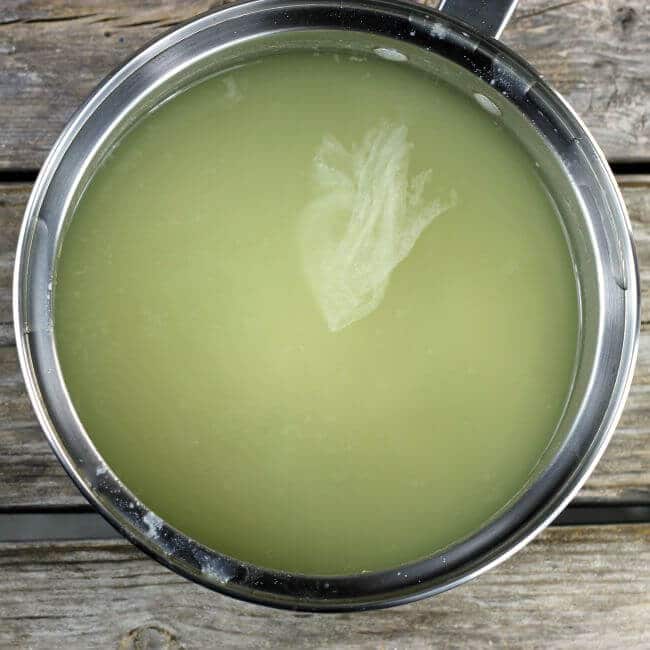 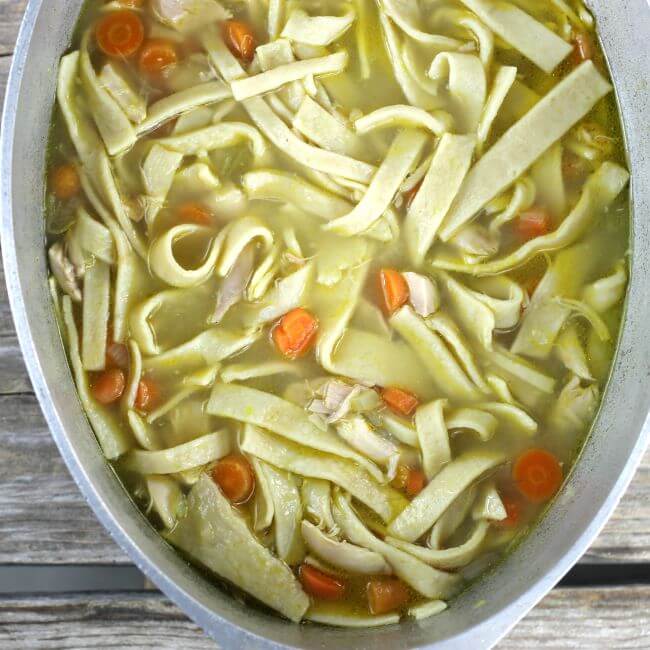 Looking for soup ideas? Check out these recipes: 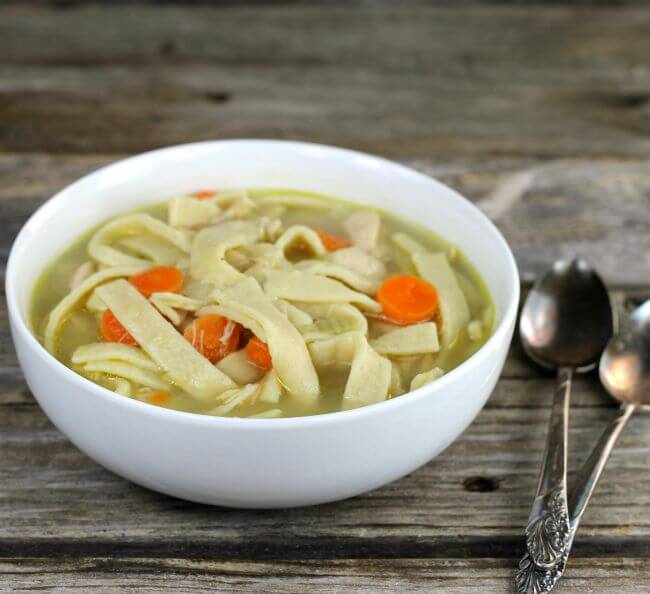 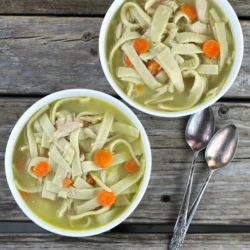 This recipe was originally published on October 30, 2015. It has been updated with new content and pictures on March 30, 2020.